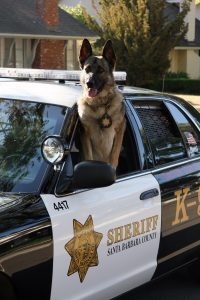 The Santa Barbara County Sheriff’s Office has lost our first and only female K-9 to work for our agency.  Retired K-9 Betti passed away yesterday, September 14, 2018, at age 14 due to health complications from old age.  Betti, whose full name is Betti Blue Van Haus Pe-ja, worked for the Sheriff’s Office for eight years before retiring in 2014.  She continued living with her handler Deputy McNeil, who remains a K9 handler with now partner Magnum, and his family. Betti had been thoroughly enjoying her retirement life.

Deputy Mike McNeil said she was a special pup and is already greatly missed.  He said, “She was the best partner and fur baby my family has had.  She was fierce, strong and driven.  She was always willing to give 100% to me, our department, and our community.  She made me proud to call her my partner.” 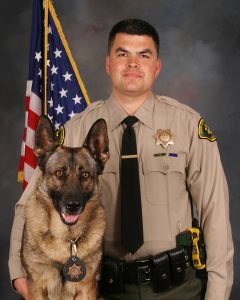 Betti retired at age ten from the Sheriff’s Office. During her eight years of time fighting she helped save many lives in Santa Barbara County.  In fact, the Santa Barbara County Board of Supervisors gave Betti a “Resolution of Commendation” upon her retirement for her outstanding performance and dedicated service to Santa Barbara County. Here is a video we did when she retired.https://youtu.be/hq1-4KeBeVs 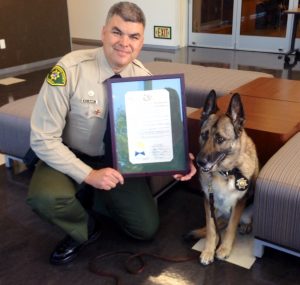 During her career, Betti helped locate more than thirty suspects including violent felons, arsonists, burglars, child molesters and drug related offenders.  One of Betti’s most memorable achievements was in 2009, when she located several types of illegal narcotics including more than 300 tablets of ecstasy in Orcutt.  On another occasion in June of 2007, she was responsible for tracking down a Goleta man who had sexually assaulted an eight-year-old girl at Girsh Park.

Betti also assisted on numerous searches for evidence and lost or missing people.  She was involved in a large number of building searches, alarm calls and deputy protection during major disturbances.  In addition to all of her crime fighting accomplishments, Betti participated in a wide range of exhibitions for thousands of people including civic groups and clubs, private organizations, youth groups and more than fifty schools.

Betti was born in Germany, came to the United States in 2005, and attended training at the Inglis Police Dog Academy in Ventura County.  She was purchased by the Santa Barbara County Sheriff’s Office through generous public donations and grant funding from the National Police Dog Foundation (NPDF). 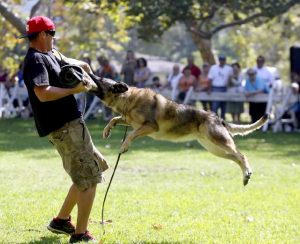 We want to thank the NPDF for handling Betti’s remains complete with an American Flag cover for her final transport.  The NPDF helps support K-9 units throughout the United States. The group helps purchase and train dogs as well as provides a network of veterinarians to assist them with providing medical care as needs arise for both active and retired police dogs.  Betti benefited from this medical care.  A special thanks to Dr. Ron Dalzell of Ventura County for taking care of Betti and many other central coast police dogs.

The NPDF is a not-for-proft charitable organization.  For information on how to support this group, go to www.nationalpolicedogfoundation.org.

Our K-9 Units are an important crime-fighting tool.  If you are interested in helping the Sheriff’s Office fund our K-9 units, contact the Sheriff’s Benevolent Posse which is raising money for this very cause through its Project Deputy Dog campaign.  The group recently raised funds to purchase K-9 Kyrpto, a narcotics dog assigned to the Santa Barbara County Jail.

On-going funding for our K-9 Unit is critical. In addition to the cost to purchase a dog, there are ongoing training expenses, supplies, equipment and funds that go toward replacing dogs who are near their service retirement.  If you would like to support Project Deputy Dog or to find out more about this important program go to www.sbsheriffsposse.org.

The Santa Barbara County Sheriff’s Posse is a not-for-profit public benefit corporation with all contributions tax deductible under section 501(c)3 of the Internal Revenue Code. The Sheriff’s Posse Board is comprised of local non-law enforcement volunteers who donate their time, and efforts to assist the Sheriff’s Office fill its needs not funded by the constrained County budget.