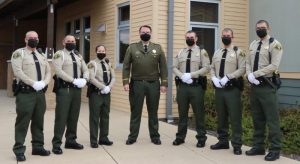 Today, six Sheriff’s Deputies graduated from the Basic Law Enforcement Academy, along with 10 other classmates, having completed 751-hours of course instruction. Graduates from the Sheriff’s Office include Steven Cruz, Emanuel DeAlba, Yeshella Jimenez, Tyler Odekirk, Christopher Portman, and Harrison Tabora. Deputy Odekirk was the co-valedictorian and also earned the Marksmanship award, Physical Fitness award, and Scenarios award.  These new deputies will be taking all they have learned in the past six months and continue their growth in the Field Training program. Upon completion of Field Training, they will be patrolling Santa Barbara County as solo deputies. If you are interested in career in law enforcement or know someone who is, please visit our website at SBSheriff.org to apply.

You can watch each of these swearing-in ceremonies on our Instagram page: SantaBarbaraCountySheriff.