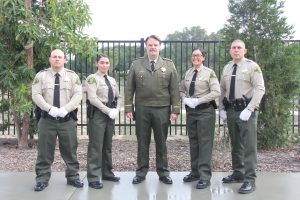 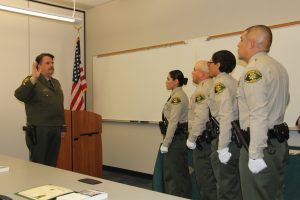 The graduates completed the California Peace Officers Standards and Training basic course, which included more than 850 hours of instruction. Some of the instruction included Leadership, Professionalism and Ethics, Crimes against Persons and Property, Laws of Arrest, Emergency Vehicles Operations, Report Writing, Arrest and Control techniques, Lifetime Fitness and Firearms training.  The Law Enforcement Academy is designed to prepare students mentally, morally, emotionally and physically to continue their training within the Field Training Program. 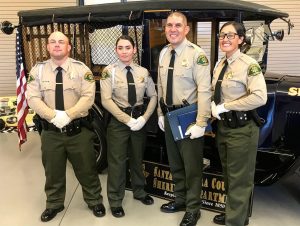 Prior to the ceremony, the Deputy Sheriff Trainees were sworn in by Santa Barbara County Sheriff Bill Brown.  Recruit Training Officer, Special Duty Deputy Vincent Buck said, “Class 116 grew together as a tight knit team and each one of the recruits was provided with a solid foundation to build their competency as a law enforcement officer.”

We are excited to welcome this great group of new Deputy Sheriff Trainees to our Sheriff’s Office family.

The Sheriff’s Office is currently accepting applications for Deputy Sheriff Trainees.  This is a tremendous opportunity for individuals who want to make a positive difference and serve their community while pursuing a career in Public Safety.  To apply, go to our website at www.sbsheriff.org and click on the Join Us section or you can go to our recruitment Facebook page at www.facebook.com/sbsorecruitmentteam/.