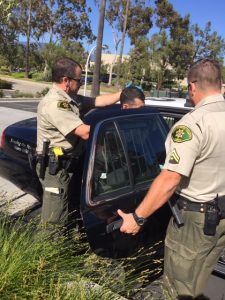 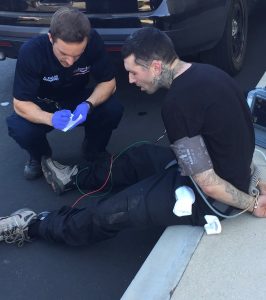 At approximately 3:45 p.m. today, May 15, 2018, Sheriff’s deputies responded to a report of theft in progress at the Home Depot located in the 6900 block of Market Place Drive in the City of Goleta. When Sheriff’s deputies arrived, they located the shoplifting suspect, 29-year-old Jeffrey Morgan of Oxnard, attempting to flee the scene in a vehicle. In his attempt to evade authorities, Morgan jumped out of his running vehicle which struck a Goleta Motor Unit causing minor injuries to the deputy. The suspect then fled on foot, across the parking lot. He scaled a fence and ran through the busy intersection of Storke Rd. and Hollister Ave. Morgan was ultimately apprehended by deputies in a hotel parking lot at the corner of Storke and Hollister.

Morgan was determined to be on parole for armed robbery and the vehicle he was driving was stolen out of the West Hills area of Los Angeles. He was treated at the scene for minor injuries he sustained while jumping over the fence. Morgan was medically cleared and booked at the Santa Barbara County Jail on charges of felony resisting arrest, felony hit and run, burglary, felony vandalism, obstructing/delaying a police investigation, possession of a burglary tool, possession of hydrocodone, committing a felony while out on bail, possession of psilocybin (mushrooms), driving a vehicle with a suspended drivers license and possession of a stolen vehicle. Additionally, a parole hold was placed on Morgan.

Fortunately, the deputy who was injured only received minor abrasions and was treated at the scene.

The Santa Barbara County Sheriff’s Office contracts with the City of Goleta for police services.
###