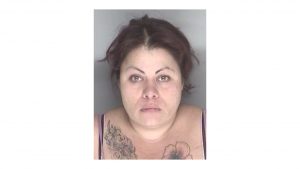 The female driver, later identified as 30-year-old Renee Romero of Solvang, headed westbound on Hollister and hit a vehicle at a stop light at Los Carneros Way.  She left the scene and kept driving westbound on Hollister Avenue. At Glenn Annie Way, she hit an electric box and two moving vehicles in the roadway.  Romero then kept driving and at Pacific Oaks and Hollister hit yet another vehicle in the roadway. The male occupant of that vehicle was transported to the hospital with minor injuries. Romero continued to drive westbound until her vehicle became disabled at Entrance Road.

Romero was contacted by a motor deputy who took her into custody for felony driving under the influence, felony hit and run and felony reckless driving.  She was transported to the hospital with minor injuries. Once she is medically cleared, she will booked at the Santa Barbara County Jail.

The Santa Barbara County Sheriff’s Office is contracted to provide police services for the City of Goleta.