Just after 9:00 a.m. this morning, April 9, 2019, Sheriff’s deputies were conducting a traffic stop in the 5000 block of Orcutt Road in Orcutt. The driver was identified as being 28-year-old Tyler Phillips of Santa Maria, who had an outstanding warrant for his arrest. During the stop, Phillips fled in the stolen vehicle. 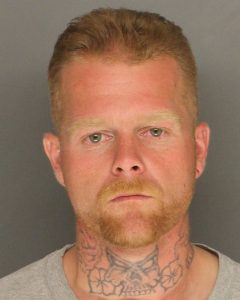 While searching the area for Phillips, deputies were advised by a nearby resident that Phillips had abandoned the vehicle and had fled the area on a bicycle. The Sheriff’s School Resource Deputy later located Phillips riding the bicycle on Orcutt Road just a few blocks away from Lakeview Junior High where he continued to flee from deputies.

Due to the close proximity to Lakeview Junior High, as a precautionary measure the school was placed on lockdown. Phillips was eventually located in the backyard of a residence on Siler Road. The lockdown was lifted approximately 15 minutes after it was initiated.