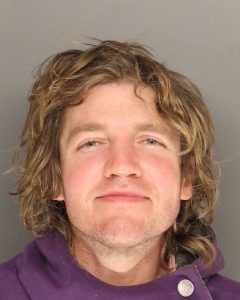 At approximately 2:00 p.m. yesterday, January 11, 2019, the Community Resource Deputy and Isla Vista Foot Patrol deputies were doing community outreach to the homeless population to provide information about shelter services due to the impending inclement weather expected.   While in Pelican Park located in the 6500 block of Del Playa Drive, they also contacted a transient about littering in the park.  The subject, who was later identified as being 32-year-old Drew Wohlenhaus, refused to provide his name and became agitated. Deputies attempted to calm him down and get him to provide his name and date of birth for a citation. Wohlenhaus refused to cooperate with the citation and attempted to walk away from deputies. Deputies attempted to detain Wohlenhaus and he became combative. Wohlenhaus tackled one of the deputies and all subjects fell to the ground during the struggle.

During the struggle to arrest Wohlenhaus, he bit one of the deputies on the shoulder and kicked another in the face. Wohlenhaus grabbed the gun of one of the deputies and attempted to forcefully remove it from the holster. The deputy had to fight to maintain control of his gun as the other deputy deployed his taser in an effort to prevent further injury and gain control of Wohlenhaus. Deputies were able to broadcast an “officer needs assistance” request over the radio and responding officers were able to assist deputies in arresting Wohlenhaus. Luckily, none of the officers sustained injuries that required medical attention. Wohlenhaus was not injured in the incident and declined medical attention.  Wohlenhaus was medically checked at the jail and a mental health request was made. Wohlenhaus was booked into the Santa Barbara County Jail for battery on two peace officers and attempted murder of a peace officer. Wohlenhaus is being held on one million dollars bail.