Suspect Arrested for Domestic Violence and Warrants After Pursuit 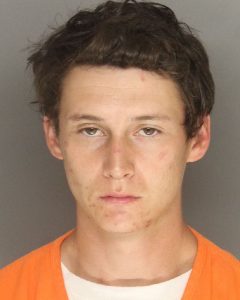 Goleta, Calif. –  On Monday, October 5, 2020 at approximately 8:41 p.m. deputies were dispatched to the 5800-block of Calle Real for a report of a suspicious subject who was known to the reporting party. While deputies were on their way, dispatch conducted a records check of the subject, 25-year-old Wesley Robert Williams of Santa Barbara.  Williams was found to have an outstanding warrant for his arrest for a violation of probation. When deputies arrived, they contacted Williams sitting in his car in the parking lot. Williams was evasive with deputies, and at one point had turned his car off before turning it back on and speeding away from the scene.

Deputies immediately went in pursuit of the wanted suspect who made his way to the 101 Freeway heading southbound. Williams exited on Garden Street and drove to a residence in the 100-block of Garden Street where he was taken into custody. Upon further investigation, deputies learned that Williams had been stalking a victim at the Calle Real location and had been involved in previous unreported incidents of domestic violence. Williams was booked at the Main Jail for his outstanding warrant as well as evading (felony), stalking (felony), resisting arrest (felony), domestic violence (felony) and terrorist threats (felony). He is being held without bail.