Suspect Arrested for Narcotics and Weapons Violations in Isla Vista 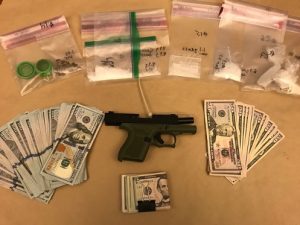 Isla Vista, Calif. – On Friday, December 18, 2020, Sheriff’s Deputies along with Officers from UC Santa Barbara Police conducted a search of a residence in the 6700-block of Sueno Road. The search was directly related to a previous traffic enforcement stop on December 5, 2020, where several firearms, firearm accessories, and narcotics were seized. During that enforcement stop, 35-year-old Jered Harwin was identified as a passenger in the vehicle and was subsequently cite released for possession of a controlled substance (misdemeanor).

As a result of the ongoing investigation into the incident, Harwin was discovered to be on conditional release from custody while he awaits trial for an unrelated incident. Pursuant to the terms of his court-ordered release, deputies conducted a search of Harwin’s residence. The search yielded over 47 grams of suspected methamphetamine, 32 grams of suspected cocaine, 3 grams of suspected heroin and a loaded, un-serialized 9mm pistol with additional ammunition.