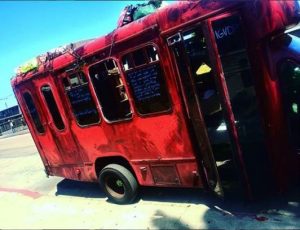 Isla Vista, Calif. – On Monday, March 18 at 10:12 p.m., detectives arrested 43-year-old Zachary Coughlin of Santa Barbara on a felony warrant for stalking. Detectives began investigating various reports regarding Coughlin on Thursday, May 14, 2020. Coughlin was living in a converted bus in the Isla Vista area and caught the attention of locals with his references on social media to the tragic mass murder that occurred in Isla Vista in 2014. His comments on social media also indicate that he shared ideology with “involuntary celibate” (incel) community. This investigation was handled by detectives from the Sheriff’s Special Investigation Bureau and involved interviews of witnesses, a behavioral threat assessment of the suspect, and combing through content from several social media accounts. Through their investigation, detectives established that Coughlin was stalking a woman in the Isla Vista area. Coughlin was booked at the Santa Barbara County Jail with a bail of $200,000 and his vehicle was towed incident to his arrest.

The Sheriff’s Office would like to thank everyone who reached out to us with their concerns. This investigation is ongoing and we encourage anyone with additional information to contact the Special Investigations Bureau via email at InfoSIB@sbsheriff.org.