Suspect in Stolen Vehicle Arrested After Pursuit Along Highway 1 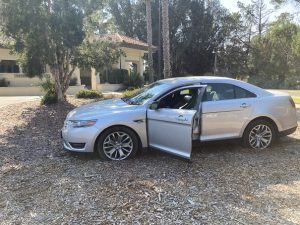 Lompoc Calif. – After a high-speed pursuit, deputies arrested a suspect in a stolen vehicle who is believed to have been involved in additional crimes in Lompoc and Guadalupe today. At approximately 10:30 a.m., Sheriff’s Dispatch broadcast a be-on-the-lookout (BOL) for a reckless driver in silver Ford sedan that was reported as stolen by Lompoc Police and possibly related to a recent robbery in Lompoc.

At approximately 1:15 p.m., Sheriff’s Dispatch broadcast a second BOL for a robbery with similar circumstances that had just occurred in Guadalupe. Deputies responded to an anticipated route of egress, and located the stolen vehicle nine minutes later in the area of Highway 1 and Casmalia Road. Deputies initiated a traffic stop and the driver failed to yield, leading deputies on a pursuit along Highway 1 towards Vandenburg that reached speeds of over 100 mph. County Air Support responded to assist along with CHP.

As the driver approached the intersection of Highway 1 and the Vandenberg Airforce Base Visitor Center, he continued straight onto Base property. The driver drove over a curb, into a landscape area in front of the Visitor Center, and fled on foot. Deputies apprehended the suspect less than minute later. The suspect, 19-year-old Maurice Pilgrim of Detroit, was arrested for possession of a stolen vehicle (felony), and evading (felony), and booked at the Lompoc Jail. The Lompoc and Guadalupe Police Departments will be conducting follow-up investigations for related crimes in each of their jurisdictions.