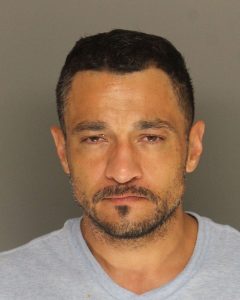 Buellton, Calif. – After a short stand-off, deputies arrested a suspect at his home in Buellton for a warrant issued by Mercer County Sheriff’s Office in Missouri. At 2:44 p.m. today, deputies responded to the 400-block of Farmland to attempt to locate a wanted suspect and stolen vehicle at the request of the Mercer County Sheriff’s Office in Missouri. The suspect, 34-year-old Mitchell Medina of Buellton, was wanted for felony vehicle theft and vehicle tampering. The stolen vehicle was a maroon Chevrolet truck. When deputies arrived at the residence, they found the stolen vehicle in the driveway. For their safety, deputies called out to Medina over their PA system, asking him to step out of the residence. Medina opened the front door and spoke with the deputies momentarily before he ran back inside and closed the door. Sergeant Woodill talked with Medina through the front window while Medina paced the living room. At one point, Medina picked up his young child and continued pacing with the child in his arms as he refused to be taken into custody.

While deputies continued to talk with Medina, additional resources including a K9 unit, the Hostage Negotiation Team, and the Special Enforcement Team began responding. Sergeant Woodill convinced Medina to come out of the residence by reassuring him that his child would be cared for if he agreed to surrender. Medina eventually walked out the front door, handed his child to Sergeant Woodill, and was taken into custody. Child Welfare Services responded and took Medina’s child into their care. The stolen vehicle was towed and Medina was transported to the Santa Barbara County Jail where he was booked for resisting arrest (misdemeanor), child endangerment (felony) and the warrant from Missouri. Medina’s local charges are $0 bail due to Emergency Rule 4. He remains in custody on the Missouri warrant while extradition is arranged.