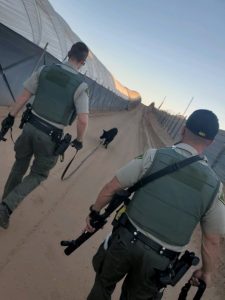 Santa Maria, Calif. – Yesterday, at approximately 4:36 p.m., Sheriff’s dispatch received a call of a burglary in progress at a business in the 4200-block of Dominion Road. When deputies arrived, they noticed a door that was slightly open. Minutes later, two suspects ran out the back side of the business. County Air Support, Deputy Moore with K9 partner Zeke and CHP responded to assist with the search for the suspects.

After a two-hour search of the area, Deputy Moore and K9 Zeke tracked the suspects approximately one mile away, hiding in a ditch. 55-year-old Joseph Edson and 33-year-old Felipe Ortiza were taken into custody without further incident. Both suspects were booked at the Lompoc Jail for commercial burglary (felony) and release with $0 bail in accordance with the local court’s extension of Emergency Rule 4.

A vehicle associated with the suspects was towed from the scene and contained items that are believed to have been stolen from the location. This investigation remains ongoing.