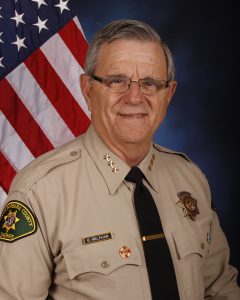 Undersheriff Bernard Melekian is the new Chairman of the Board for the National Police Foundation. The Undersheriff was recently elected to the position after serving on the Board of Directors for the past three years.  The National Police Foundation (NPF) is a Washington D.C. based research organization, committed to the premise of “advancing policing through innovation and science.”

Undersheriff Melekian said he is pleased to take on this new role, in addition to his position as second in command at the Sheriff’s Office.  He said, ““I am honored to have been selected and look forward to continuing to work on issues of national significance related to policing.”  All NPF Board members volunteer their time and are reimbursed only for travel expenses.

The NPF was founded in 1970 through a grant from the Ford Foundation. Previous Chairmen include Dr. James Q. Wilson, William Webster and Governor William Milliken (Michigan). The purpose of the National Police Foundation is to help law enforcement to be more effective in serving their respective communities.   The group works closely with law enforcement agencies across the country.  The Police Foundation has been in existence for 45 years and has supported or conducted numerous scientific studies in policing which have changed policing and continue to influence policing today. The current President of the Foundation is James Bueermann, retired Police Chief from Redlands, CA.

Undersheriff Melekian, who has more than 45 years of law enforcement experience, was hired by the Santa Barbara County Sheriff’s Office in January of 2015 and is responsible for the day-to-day operations of the Sheriff’s Office.  Prior to accepting the position as Undersheriff, he was a Commissioner on the state of California’s Peace Officer Standards and Training Commission as well as serving on the city of Santa Barbara’s Police and Fire Commission. He is currently a board member on the Santa Barbara Council on Alcoholism and Drug Abuse.