At approximately 1:45 p.m. today, October 6, 2018, a citizen reported to the Santa Barbara County Sheriff’s Office that they found a WWII Mk 2 pineapple grenade while cleaning out their garage on Tajo Dr. in Santa Barbara.  The citizen was unaware of the grenade’s existence until found.  However, it is believed the grenade belonged to the citizen’s deceased grandfather who is a WWII veteran.  The grenade was believed to be live.  Deputies evacuated the area, including the properties of next-door neighbors.  A Sheriff’s Bomb Team member responded and safely collected the grenade for later disposal. 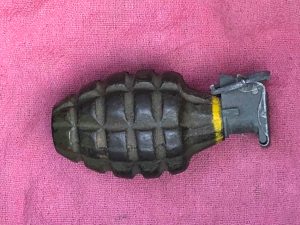