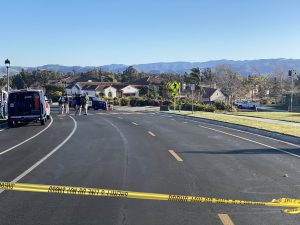 Sheriff’s detectives are investigating an incident in the Providence Landing neighborhood of Lompoc that ended in an officer involved shooting. At approximately 1:34 p.m. on Wednesday, February 23, 2022, Sheriff’s Dispatch broadcast a be-on-the-lookout for the California Highway Patrol (CHP) for a hit and run driver who had been involved in multiple collisions in the 4000-block of Stardust Road in Lompoc. Deputies responded to assist CHP and check the area while their units were still enroute.

Deputies arrived in the area at approximately 1:51 p.m. and contacted the suspect in the 600-block of Mercury, near a recreation building. The sequence of events that transpired after deputies initially contacted the suspect are under investigation. What is apparent now is that two deputies shot at the adult male suspect and struck him in the upper torso area. The suspect was transported to an area hospital by ambulance. The involved deputies did not require medical attention.

During this event, residents in the 600-block of Mercury Drive were asked to shelter in place and Maple High School was placed on lockdown. Once the scene was secure, both restrictions were lifted.

This investigation is ongoing, and the names of the involved parties are not yet available for release. The suspect is in stable condition and is expected to recover. CHP will be investigating the traffic collisions, Sheriff’s detectives will investigate the contact between the deputies and the suspect, and the Sheriff’s Office will conduct an administrative review of the incident in accordance with policy.