Proud and Honored to be Your Sheriff

“I am humbled to have been elected by – and to serve – the people of Santa Barbara County. It is my honor and privilege to lead the men and women of our Sheriff’s Office, some of the finest law enforcement and corrections professionals on the planet.”

Sheriff Brown received his master’s degree in public administration from the University of Southern California in 1995. He was president of the 91st Class of the Delinquency Control Institute, and is a graduate of the Northwest Command College, the 169th Session of the FBI National Academy, and the 33rd Session of the FBI National Executive Institute.

Sheriff Brown is a past president of the California State Sheriffs’ Association and a past president of the California Police Chiefs’ Association; as such, he is the only person to have ever held both positions. Since 2010 he has served as a Commissioner on the Mental Health Services Oversight and Accountability Commission for the State of California, and he leads Santa Barbara County’s version of “Stepping Up,” a National Initiative to Reduce the Number of Mentally Ill People in Jails. Sheriff Brown is also Chairman of the Santa Barbara County Law Enforcement Chiefs (C.L.E.C.).

Sheriff Brown was awarded the Westmont Medal from Westmont College and the Goleta Elks Outstanding Service Award for his leadership during the twin disasters of the Thomas Fire and the Montecito 1/9 Debris Flow.

Active in his community, Sheriff Brown serves as an honorary board member for the North County Rape Crisis and Child Protection Center and Santa Barbara Domestic Violence Solutions, as an advisory board member of the Anti-Defamation League and the United Boys and Girls Clubs of Santa Barbara County, and as a Red Cross Ambassador for the Santa Barbara Chapter of the American Red Cross. He is also a steering committee member for Santa Barbara’s “Fighting Back” (Against Alcohol & Drug Abuse), sits on the Lompoc Hospital District Board of Trustees, and is on the board of directors for the Pierre Claeyssens’ Veterans Foundation.

Sheriff Brown is deeply committed to the philosophy of community policing and corrections, wherein peace officers and citizens work together to identify and seek long-term solutions to problems relating to crime, fear of crime, neighborhood decay and quality of life. Sheriff Brown and his wife, Donna, have been happily married for more than 40 years and have three grown children. 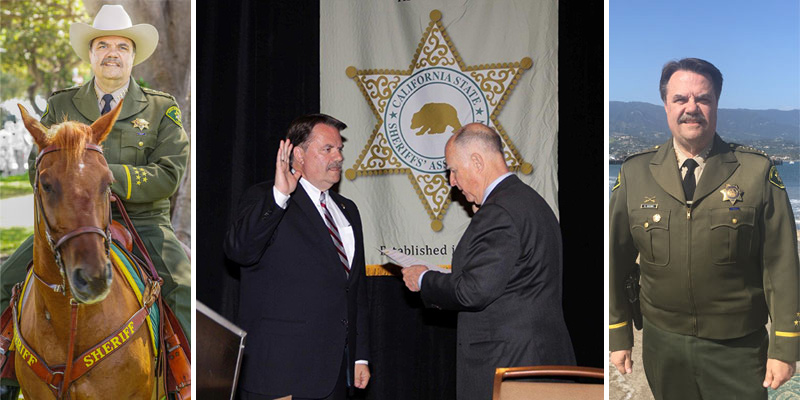