Goleta, Calif. –  Sheriff’s deputies arrested two suspects for theft of catalytic converters and have recovered six stolen converters. On Tuesday, October 11, 2022, at approximately 3:40 a.m., deputies responded to the area of Dearborn Place and Armitos Avenue for a reported theft of a catalytic converter that had just occurred. The reporting party provided a suspect vehicle description. Approximately 7 minutes later, deputies spotted a similar vehicle on Highway 101, southbound and conducted a traffic enforcement stop near the Las Positas offramp. 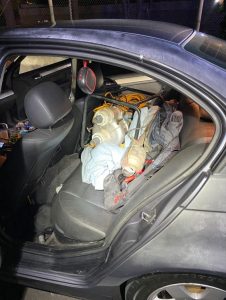 During the traffic stop, deputies found a total of six stolen catalytic converters in the vehicle along with a car jack and several electric saws. Deputies arrested both occupants of the vehicle, 29-year-old Francisco Puente from the Los Angeles area and 37-year-old Francisco Javier Trujillo Gaona from Culver City. Both suspects have been booked at the Santa Barbara Main Jail for six counts of grand theft (felony), six counts of conspiracy (felony), six counts of vehicle tampering (misdemeanor), possession of burglary tools (misdemeanor) and are being held on an enhanced bail of $500,000. Puente was booked on the additional charges of possession of a controlled substance (misdemeanor), and possession of drug paraphernalia (misdemeanor). 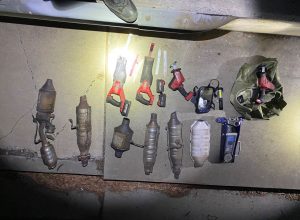 The Sheriff’s Office would like to acknowledge the quick thinking of the reporting party who called 911 when they realized they were likely hearing a catalytic converter theft. The theft of catalytic converters is popular because they can be easily removed, they do not have identifying marks like serial numbers, and the components are made up of precious metals that can be resold to recyclers. There are steps that can be taken to thwart these thefts including parking inside a garage or secured yard, installing motion detector lights near parking areas, installing a catalytic converter protection device, and educating neighbors to be on the look-out for thieves.