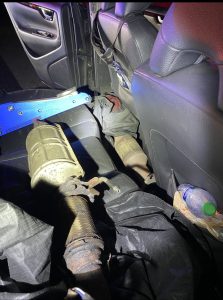 Sheriff’s deputies have arrested two suspects for theft of catalytic converters and recovered two of four reported stolen converters. On Saturday, March 19, 2022, at a 5:37 in the morning, Carpinteria patrol deputies were dispatched to the 500-block of Arbol Verde for a report of a catalytic converter theft that had just occurred. The victim heard what sounded like a saw cutting metal and suspected a theft was in progress.  The victim called 911 to report the incident and discovered the catalytic converter had been stolen from his Toyota Prius, parked in the driveway.

A few minutes later, deputies noticed a vehicle leaving the area and initiated a traffic enforcement stop for a vehicle code violation. When deputies contacted with the occupants, they noticed two catalytic converters in the backseat. During a search of the vehicle, reciprocating saws, a car jack, and other tools were located. Deputies arrested the occupants, 41-year-old Banny Lo and 27-year-old Gary Lee, both from Sacramento. They were booked into Santa Barbara County Main Jail for grand theft, possession of stolen property, possession of burglary tools, and conspiracy. Lo was also booked for possession of a controlled substance. Due to these crimes generally being committed by suspects associated with organized theft rings and no connection to Santa Barbara County, a bail increase to $100,000 was granted. 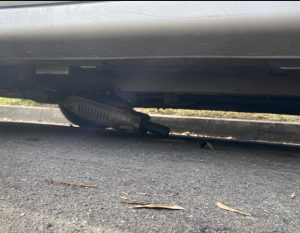 The Sheriff’s Office would like to acknowledge the quick thinking of the victim who called 911 when they realized they were likely hearing a catalytic converter theft. The theft of catalytic converters is popular because they can be easily removed, they do not have identifying marks like serial numbers, and the components are made up of precious metals that can be resold to recyclers. There are steps that can be taken to thwart these thefts including; parking inside a garage or secured yard, installing motion detector lights near parking areas, installing a catalytic converter protection device, and educating neighbors to be on the look-out for thieves.