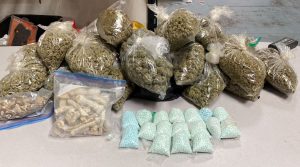 Santa Maria, Calif.  – Detectives from the Sheriff’s Office Special Investigations Bureau have arrested a Santa Maria man and seized a large amount of various illegal drugs. On Thursday, August 4, 2022, at approximately 7:00 a.m., detectives served a search warrant at a residence in the 100-block of north Curryer Street. As a result of this warrant, detectives seized approximately 17,000 suspected counterfeit M30 fentanyl pills, 22.5 pounds of cannabis flower, 27 grams of MDMA or ecstasy, 218 grams of psilocybin mushrooms, three grams of cocaine and hundreds of acid tabs.  Some of these dangerous narcotics were found in areas accessible to children who were residing in the residence. As a result, detectives arrest 21-year-old Victor Olivera-Hernandez and booked him at the Northern Branch Jail for child cruelty (felony), unlawful possession of ammunition (felony) and possession of narcotics for sales (felony). He is being held on an enhanced bail of $250,000.