Goleta, Calif. – A Sheriff’s deputy interrupted the theft of avocados at a ranch in Goleta and arrested a Lompoc man for the grand theft of fruit as well as narcotics charges. On Sunday, May 8, 2022, Sheriff’s Deputy Special Duty Hartley Freedman was patrolling the Goleta area when he noticed a vehicle stopped on the shoulder of the roadway in the 6900-block of Cathedral Oaks Road. The deputy contacted 44-year-old Tim Rounds of Lompoc walking nearby, wearing a headlamp on his forehead, and holding a bucket of avocados. The deputy also noticed a bag of methamphetamine on the dashboard of the vehicle. 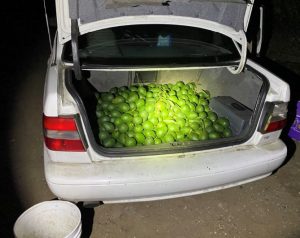 During a search of the vehicle, deputies discovered a methamphetamine pipe and a trunk full of avocados. Deputies contacted the owner of the ranch and learned that Rounds did not have permission to harvest their avocados. Deputies arrested Rounds for grand theft of fruit (felony), possession of a controlled substance (misdemeanor), and possession of drug paraphernalia (misdemeanor). He was booked at the Main Jail and released without bail in compliance with the local court’s extension of Emergency Rule 4. The avocados were photographed and returned to the ranch owner.