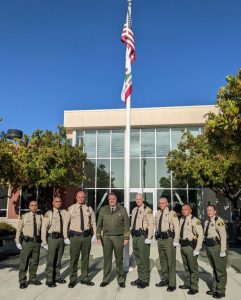 The graduates completed a comprehensive California Standards and Training for Corrections with 243 hours of instruction. Some of the instruction included emergency planning in a custody facility, report writing, ethics, investigation procedures, classification of inmates, contraband detection, arrest and control, physical training and Direct Supervision training.

In Sheriff Brown’s keynote speech, he offered advice to Custody Deputies saying, “Look for the good in people, live within your means, exercise common sense, and respect yourself and other people – whether they be loved ones, colleagues, arrestees, or other members of the public.”

If you are interested in career in law enforcement or know someone who is, please visit our website at SBSheriff.org to apply.