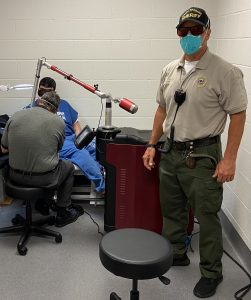 Santa Maria, Calif. – The Santa Barbara County Sheriff’s Office has launched an inmate Tattoo Removal Program at the Northern Branch Jail (NBJ). On Wednesday, June 29, 2022, Dr. Bernard Weinstock performed the first round of tattoo removal treatments for an inmate at the NBJ. This program has been made possible through a partnership with Doctors John Baeke and Bernard Weinstock, who attended special training on how to use the Tri-Beam laser tattoo removal machine. The purpose of the Tattoo Removal Program is to assist the Sheriff’s Office in the rehabilitation of inmates by removing tattoos or body art that may be deemed socially unacceptable and which could hinder their ability to reintegrate back into the community. The Sheriff’s Office mission through this program is to help eliminate barriers which could hamper the inmate’s successful re-integration into society.

The NBJ Inmate Services Program plans to offer these treatments to inmates, free of charge with appointments on a weekly basis. Criteria for participation in this program include participation in rehabilitation programs, no current discipline reports, and sentencing must be finalized with sufficient confinement time to complete the tattoo removal process.