Santa Barbara Man Arrested for the Attempted Murder of his Housemate 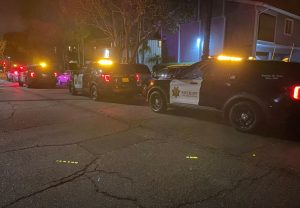 Santa Barbara, Calif – Santa Barbara County Sheriff’s Detectives have arrested a Santa Barbara man for attempted murder of his housemate. On Thursday, May 26, 2022, at approximately 8:36 p.m., Sheriff’s deputies responded to the 4800-block of San Gordiano for a stabbing that had just occurred. When deputies arrived, they found an adult male victim with severe wounds to his upper torso area. Deputies also located the victim’s housemate, 61-year-old Alejandro Teran of Santa Barbara, outside the residence. The victim was immediately transported to an area hospital with life-threatening injuries.

Sheriff’s detectives and Forensics Technicians responded to the scene to assist with the follow-up investigation. Detectives learned that the victim and his roommate were involved in an altercation where Teran, ultimately stabbed the victim several times in the upper torso. Detectives arrested Teran and he was booked at the Main Jail for attempted murder with a bail of $1,000,000. The victim remains hospitalized but is expected to survive.