Santa Barbara, Calif. – The Santa Barbara County Sheriff’s Office would like to congratulate the three Sheriff’s employees who were among the 12 recipients honored on May 18, 2022, with a prestigious H. Thomas Guerry Award. The honors were handed out at a ceremony held at the Santa Barbara County Board of Supervisor’s Hearing Room attended by personnel from local law enforcement agencies and local dignitaries as well as family and friends of those being recognized.

The H. Thomas Guerry Award is named after a Santa Barbara Police Department Officer who was killed in the line of duty in 1970. Every year in his memory, the Santa Barbara Citizen’s Council on Crime recognizes excellence in law enforcement in Santa Barbara County. 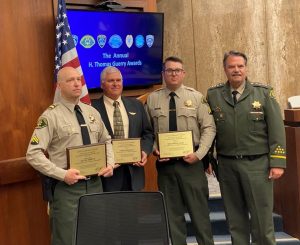 This year, two Sheriff’s deputies were honored with the H. Thomas Guerry Award for Valor for their courageous, swift and resolute actions under life threatening circumstances On Tuesday, November 9, 2021, at approximately 1653 hours, deputies were dispatched to assist fire personnel with a structure fire in the 100 block of Orange Avenue in Goleta, CA.  After deputies were dispatched, it was reported someone was possibly trapped inside the building.

Deputies Ashley and Ellis were the first to arrive on scene.  They were directed to the affected apartment by a neighbor, and they were able to see dark black smoke billowing from the apartment. The deputies made their way to the apartment and initially could not see inside due to the thick smoke.

Deputy Ellis attempted to look inside but was quickly overwhelmed by the smoke and pulled his head back outside. Deputy Ashley dropped to the ground and was able to see as there was a layer of clear air along the floor. He estimated the smoke was standing about one and a half feet off the floor and he was able to see a woman down on the floor about twenty feet inside the apartment.

Deputy Ashley held his breath and crawled along the floor making his way to the woman.  When he arrived, he saw her clothing was on fire and she was unconscious. He patted the fire out on her clothing and began to pull her out of the apartment, crawling on his back and pulling her behind him.

Deputies Ashley and Ellis took a moment to catch their breath after coughing from smoke inhalation, then carried the woman to the street.  Once at the street they rendered aid to the woman until additional personnel arrived to assist.  The woman was transported to Cottage Hospital and was later transported to a hospital in Los Angeles. The woman is currently recovering from her injuries at a recovery hospital in the Los Angeles area. If it was not for the quick thinking and immediate actions of these two Sheriff’s deputies, it is doubtful that the woman would have survived the fire.

Sheriff’s Pilot Loren Courtney was honored with the H. Thomas Guerry Award for Superior Performance for his extraordinary dedication to public service and his exemplary performance. Loren is responsible for flying law enforcement, medevac, technical rescue and firefighting missions. He is tasked with maintaining proficiency in five different aircraft, each with their own capabilities. He works with four different crew chiefs, each with their own operational styles. In addition to the current fleet and crews, Loren has been instrumental in the buildout process of the unit’s new Blackhawk helicopter. Pilots at the Air Support Unit typically work a 4/10 schedule, remaining on-call between shifts for half of the two week pay period. Loren, to keep the unit fully operational, works a 5/10 schedule and remains on-call during his work week as well as during his 2 days off. He is often called back to work for callouts on his days off. Loren minimizes his vacation time, and always put the operational needs of the unit above his own personal needs.

In 2021, Pilot Loren Courtney flew a total of 256.6 hours, totaling 71% of all flight hours in the unit. Those flights hours included 30 medivac transports, 28 hoist rescues, and the response to 38 vegetation fires resulting in 238 water drops. Loren launched on 104 responses to law enforcement missions, including 27 vehicle pursuits, 3 foot pursuits, and 35 crime related searches, resulting in the apprehension of 35 suspects. Loren responded to 79 of these incidents after-hours.

Pilot Loren Courtney has shown exceptional loyalty and dedication to the Air Support Unit, to the fire service and law enforcement agencies that he flies in support of, and, most of all, to the people of Santa Barbara County. When a fire threatens to burn out of control, when a lost or injured person needs rescue, when the safety of the public is threatened by criminal suspects on the run, only then is the true benefit of the Air Support Unit realized. Loren Courtney is the pilot who held the unit together during the unit’s staffing challenges in 2021.

The Sheriff’s Office wants to thank the Santa Barbara Citizens Council on Crime for putting on the H. Thomas Guerry Awards for the past 52 years and for providing an opportunity to recognize law enforcement personnel who have gone above and beyond to protect and serve their community.