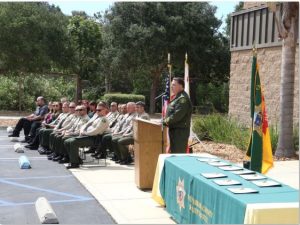 Next, Sheriff Brown congratulated promotees and shared leadership lessons from Ernest Shackleton, an Anglo-Irish explorer whose life’s meaning came from the kinds of close shaves one encounters only on an expedition. Sheriff Brown said, “He is not only the kind of great adventure story that begs to be read… it’s also one of the all-time best true stories about what it means to be a real leader.” Sheriff Brown shared leadership lessons from the explorer and spoke about how Shackleton understood the hunger for adventure and purpose that’s inside the hearts of men and women and how Shackleton encouraged and kept his people focused when adversity struck. Sheriff Brown encouraged the promotees to lead with the same courage, flexibility, and optimism and shared how Shackleton showed incredible resolve and never wavered from his commitment to his people. 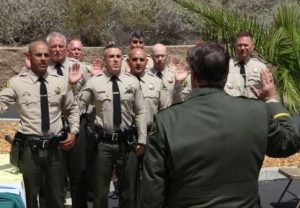 If you or someone you know is interested in a career in law enforcement- please visit SBSheriff.org for more information on how to join our team.