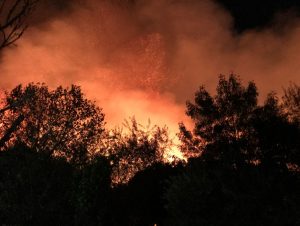 Santa Barbara, Calif –   Sheriff’s Deputies have arrested a suspected arsonist in the Ward Incident fire. On Wednesday, November 2, 2022, at approximately 11:40 p.m., deputies responded with County Fire to a report of a fire in the brush area near the bike path between the south end of Ward Drive and More Ranch Road.  When deputies arrived, a witness provided information about a possible suspect in the area.

While deputies warned residents in the surrounding area of the fire, additional deputies searched for the suspect who reportedly intentionally started the fire. At approximately 11:57 p.m., deputies located and detained a person matching the suspect’s description provided by witness on the bike path near Patterson Road. The suspect, 30-year-old Jose Martin Alvarez-Castro of Santa Barbara, was subsequently arrested for obstructing a peace officer (misdemeanor), arson (felony), and possession of a controlled substance (misdemeanor). He is being held at the Main Jail on $20,000 bail.

Sheriff’s deputies remained on scene until County Fire confirmed that the evacuation warning that was issued for the More Ranch Road area was lifted. A Santa Barbara County Fire Investigator will be conducting the full investigation into this incident.