Suspect Arrested for Brandishing a Ghost Gun in Isla Vista 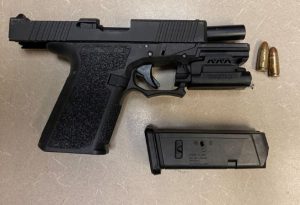 Isla Vista, Calif. – On Saturday, July 30, 2022, at approximately 11:17 p.m., Sheriff’s deputies along with officers from UC Santa Barbara Police responded to the 6600-block of Del Playa Drive for a report of a man waving a gun in the air at a party. When law enforcement arrived, they noticed a male who matched the description of the suspect lift his shirt revealing a handgun in his waistband. The male subject, later identified as 19-year-old Enzo Urrea of Goleta, attempted to run from officers and deputies but was apprehended within a short distance. Urrea was found in possession of an unloaded 9mm “ghost gun” with no serial number along with 2 rounds of live ammunition in his pockets.