Suspect Flees from Deputies in Santa Barbara, Apprehended in Lompoc

Sheriff’s deputies have arrested a Goleta man that fled from a traffic stop in Santa Barbara and was tracked to Lompoc. On Friday, January 7, 2022, at approximately 2:35p.m., deputies were dispatched to the 1000-block of Via Regina in Santa Barbara to investigate a suspicious vehicle that appeared to be involved in possible drug sales. When deputies arrived, they contacted a male driver and female passenger inside a black Jeep Cherokee. The driver, who gave deputies a false name, was asked to exit the vehicle and instead drove away from the traffic stop.

Deputies pursued the vehicle onto the northbound 101 freeway, until he reached a construction zone near El Capitan, where they terminated the pursuit in the interest of public safety. After terminating their pursuit, deputies identified the driver as 33-year-old Alan Kilgore of Goleta. A records check of Kilgore revealed that he had outstanding warrants for his arrest. The California Highway Patrol was advised of the wanted vehicle and staged in the area of Highway 101 and Highway 1 where they initiated a traffic stop, and Kilgore failed to pull over. CHP pursued Kilgore towards the city of Lompoc as County Air Support arrived overhead. As Kilgore approached Ocean Avenue, CHP terminated their pursuit in the interest of safety.

County Air Support tracked Kilgore’s vehicle through Lompoc as he continued to drive recklessly, at times on the wrong side of the road and running red lights with nobody pursuing him, until he came to a stop at the north end of Riverbend Park. Kilgore and the female passenger exited the black Jeep and forced the driver of a silver Honda Accord out of their vehicle and drove away with it. Deputies caught up to Kilgore driving with the female as the passenger in the Honda in the lower parking lot of Riverbend Park. A deputy intentionally rammed (see Sheriff’s Office policy 314 here) the Honda which was traveling at low speeds in the parking lot, effectively disabling it and stopping Kilgore from further endangering the public. Deputies took Kilgore into custody at 5:22 p.m. and he will be booked at the Main Jail. Charges and bail amounts are pending. 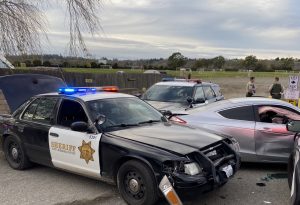 There were no significant injuries to the carjacking victim, deputies, the suspect or his passenger. The adult female passenger was determined to be an unwilling participant and a suspected victim of kidnapping. Her identity is not available for release.