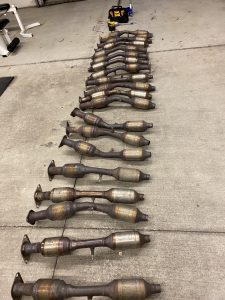 Santa Barbara, Calif. – A traffic enforcement stop has resulted in the arrest of two suspects and the recovery of 20 catalytic converters. On Tuesday, January 17, 2023, at approximately 3:30 a.m., a deputy on proactive patrol conducted a traffic enforcement stop of a vehicle leaving the Isla Vista area, near Los Carneros Road and Castilian. As a result of the stop, deputies found 20 catalytic converters inside the vehicle along with a floor jack and an impact drill. Deputies arrested both occupants of the vehicle, 25-year-old Arman Abrahamyan from Van Nuys and 27-year-old Levon Martirosyan from Glendale for grand theft (felony), possession of burglary tools (misdemeanor), possession of stolen property (felony), and conspiracy (felony). Both suspects are being held at the Main Jail on $20,000 bail.

Deputies from the Isla Vista Foot Patrol and Goleta Patrol have taken several reports for thefts of catalytic converters throughout the day on Tuesday. Victims who have not yet reported their catalytic converter as stolen can use the online reporting portal at SBSheriff.org or contact Sheriff’s Dispatch at 805-683-2724.