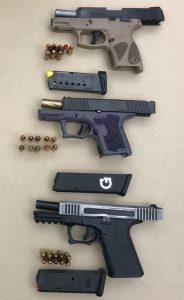 Isla Vista, Calif. – Deputies from the Isla Vista Foot Patrol station have arrested a Lompoc man for weapons charges and confiscated three un-serialized “ghost guns”. On August 14, 2022, at 12:15 a.m., the victim was holding a party in his Isla Vista residence when the suspect, later identified as 20-year-old Raymond Rene Gaitan Jr. of Lompoc, joined the party. When the victim asked the suspect to leave, he brandished, assaulted, and criminally threatened the victim with a handgun. The suspect fled, and the victim called 911. Deputies searched the area for the suspect, but they were unable to locate him that night. Through their follow-up investigation, deputies were able to identify Gaitan as the suspect.

On August 20, 2022, at 12:51 a.m., Isla Vista Foot Patrol deputies were on Del Playa Drive when they saw the Gaitan driving his car. Deputies followed the suspect, and a high-risk stop was conducted on Storke Road at Hollister Avenue in Goleta. In the vehicle with Gaitan were two 15-year-old male passengers. One of the juveniles was carrying a concealed, loaded “ghost” gun, while the other was carrying two loaded “ghost” guns. Deputies determined that Gaitan had given his gun to one of the juveniles to avoid being caught in possession of the loaded firearm.