Wanted Suspect Flees from Sheriff’s Detectives, Fires a Firearm and is Arrested

Santa Maria, Calif. – Sheriff’s Detectives from the Compliance Response Team (CRT) have arrested a wanted Santa Maria man after he fired a single round from a firearm while attempting to flee. On Monday, May 9, 2022, at approximately 9:26 a.m., CRT detectives attempted to contact 46-year-old Adam Valdez of Santa Maria in the parking area of a residence in the 300-block of east Enos Drive for his outstanding warrant for a violation of probation.

When Valdez noticed the CRT detectives, he attempted to flee, while drawing a firearm from his waistband area. As he drew the firearm, he fired a single shot in an unknown direction. CRT detectives swiftly took Valdez into custody, without returning fire, and secured the weapon. Sheriff’s detectives and Valdez were uninjured during this exchange. Detectives conducted a thorough canvas of the surrounding area and did not find any bystanders or property damage from the shooting. 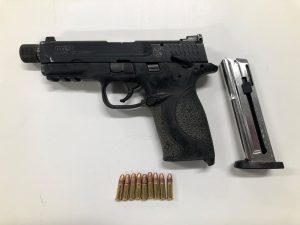 Valdez was booked at the Northern Branch Jail for assaulting a peace officer with a firearm (felony) and felon in possession of a firearm (felony) in addition to his outstanding warrants from Santa Barbara and Ventura County for numerous narcotics and weapons related charges. Valdez is being held on an enhanced bail of $1,000,000.

The Compliance Response Team (CRT) is funded by State AB109 money distributed through the Community Correction Partnership, a committee of various county law enforcement and judicial representatives. CRT consists of Sheriff Detectives and Probation Officers and was created after the State’s Prison Re-alignment program.